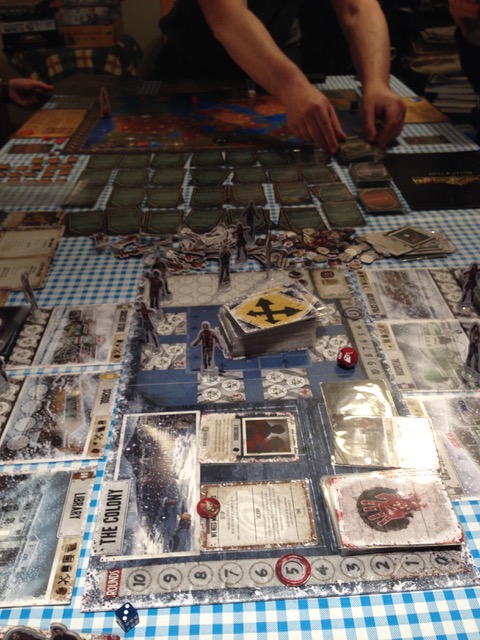 Link to Part I and Part II.

Zombicide is classic ‘Ameritrash’: a term used affectionately by gamers to describe a big, overproduced, miniature-filled, thematically heavy, and comparatively luck-driven game intended to emphasise the fun to be found in the action rather than require intense concentration. It is scenario-based, though, allowing you to play out a series of micro-narratives with short term goals as you fight to secure each corner of the game world, or at least obtain from it what you need to move on to the next map, where yet more zombies patiently await you. It will be interesting to see how the Night of the Living Dead edition will play, though, as it simulates the action from the film in the claustrophobic space of the house and farm, and offers black and white art to emulate the feel while also, of course, ‘updating’ it. 1968 Barbara , for instance, is not going to be a very useful character if her main skill is remaining catatonic until zombie Johnny comes looking for her. In fairness, the Zombicide games are also at least semi-comical and satirical, with many of the characters modelled after recognisable figures from cinema, television, and even popular music. You could assemble the knights from Monty Python and the Holy Grail (1975), or organise versions of Prince, Lemmy, David Bowie, and Freddie Mercury to take up arms, and in keeping with when it was released, one edition of the game came with a super mutant enemy called the Covfefe .

Zombicide is a rollicking adventure game, and though it becomes overwhelming as the zombies keep coming, it’s not particularly intense. It’s hard to hold onto a sombre mood when you’re playing as Walter and The Dude from The Big Lebowski. Some games in this mould are more frenetic. In Escape: Zombie City (2014), designed by Kristian Amundsen Ostby, from the family game publisher Queen Games, an in-game soundtrack (on CD or download) serves as a timer (or you can use an egg timer) and you have to roll dice as quickly as possible to achieve combinations you need to run around the city grid evading enemies and gathering necessary supplies to win. The game is sweat-inducing and physical, and you also have to work with the other players to get the results you need, making for a noisy session where you are screaming to check if anyone has the dice face you need showing right now! It’s not for the faint of heart, but it is very fast. The real-time group play  enhances the sense of co-operation in a high pressure situation, and captures the mood of precariousness and fragility of fight or flight. In Dead Panic (2013), an independently produced zombie-themed version of a more family-oriented game called Castle Panic (2009) designed by Justin De Witt, you defend a central location, a shack in the middle of the woods, from a constant onslaught of enemies with variable abilities requiring different tactics to defeat. In an interesting twist also used in the Zombicide Night of the Living Deadvariant, every player character also has a zombie version, and if you are killed you spawn as a zombie with enough free will to make your own decisions about how to attack the survivors. It gets very personal when you respawn. It’s amazing how the goals of building the barricades, repairing the radio, and fixing holes in the walls suddenly seem insignificant compared to the need to get in there and eat your follow players’ brains once you’ve turned. The cares of this world just melt away and now you just want to share the zombie zen with your former allies. This role reversal adds significant narrative and ludological elements to add to these kinds of games. The nice twist in Dead Panic is that your undead version still has special skills and isn’t bound by the programmed movement of the horde, although naturally you are not quite as agile and enabled as a functional human. The conditions of play change, as well as your preferred outcome.

Inevitably, zombie games centre on the moral dilemma of personal versus social survival . Many of them are co-operative or semi-co-operative, and follow that Dawn of the Dead narrative of trying to build some kind of sanctuary in a collapsed or collapsing world. Shopping malls feature a lot, and once again the paradox of a world of consumerism in which the consumers are likely to be consumed plays out as survivors inevitably scrounge for resources to survive and cobble together weapons and defences to protect their meagre harvest. In 2005 Mall of Horror, designed by Nicolas Normandon, introduced a savage social twist on the scenario by having players voting each round on which survivor to eject from the various places of shelter in the mall. Those ejected would have to run a risky mission to prove they are worth keeping alive or arm themselves sufficiently to open up somewhere else to hide, while the massed group try to hold out as resources get used up. They’ll have to move on eventually, and maybe, then, they’ll have to come to you. The game was re-implemented (redesigned slightly) as City of Horror in 2012, opening up the setting a little.