END_OF_DOCUMENT_TOKEN_TO_BE_REPLACED

There are a lot of zombie games. I’ve only scratched the surface here (and hopefully infection will follow). At our 2019 conference, you may recall that before my paper on Train to Busan, I put up a picture of some of the games from my collection. I have quite a few (I’ve also got a few postapocalypic non-zombie Mad Max style games, but that’s another story). Maybe next time instead of designing our zombie manager, we can play one of these games. If I were to pick one, it would be Dead of Winter (2014), designed by Jonathan Gilmour and Isaac Vega, another popular zombie game that has produced numerous expansions and spin-offs of its own. END_OF_DOCUMENT_TOKEN_TO_BE_REPLACED

A key element of many of these kinds of games is the sense of discovery that comes with the joy of postapocalyptic looting, and there are many classic calculations of risk versus reward in how you choose to expend energy and resources in other to gather more of both through food and supplies. Tiny Epic Zombies (2018), designed by Scott Almes, is a kind of summative game in this mould, as are all the entries in the ‘Tiny Epic’ line by Gamelyn Games, which present popular themes and game systems in small boxes at a comparatively low price, designed to be portable and accessible. Part of the fun in Tiny Epic Zombies is the plastic ‘meeples’ (a gaming term for playing pieces that are roughly people shaped – mini-people, you see), which you can actually equip with weapons (tiny plastic ones) or even mount on a motorbike as you zoom around the mall pinging zeds and collecting items. A considerably more exotic setting is found is the independently published Carnival Zombie (2013), designed by Matteo Santus, set in Venice during the titular event, which adds a piquancy of a Bakhtinian society turned upside down and players embody kinky medieval archetypes including a Harlequin or a masked Plague Doctor. END_OF_DOCUMENT_TOKEN_TO_BE_REPLACED

Link to Part I and Part II.

Zombicide is classic ‘Ameritrash’: a term used affectionately by gamers to describe a big, overproduced, miniature-filled, thematically heavy, and comparatively luck-driven game intended to emphasise the fun to be found in the action rather than require intense concentration. It is scenario-based, though, allowing you to play out a series of micro-narratives with short term goals as you fight to secure each corner of the game world, or at least obtain from it what you need to move on to the next map, where yet more zombies patiently await you. It will be interesting to see how the Night of the Living Dead edition will play, though, as it simulates the action from the film in the claustrophobic space of the house and farm, and offers black and white art to emulate the feel while also, of course, ‘updating’ it. 1968 Barbara , for instance, is not going to be a very useful character if her main skill is remaining catatonic until zombie Johnny comes looking for her. In fairness, the Zombicide games are also at least semi-comical and satirical, with many of the characters modelled after recognisable figures from cinema, television, and even popular music. You could assemble the knights from Monty Python and the Holy Grail (1975), or organise versions of Prince, Lemmy, David Bowie, and Freddie Mercury to take up arms, and in keeping with when it was released, one edition of the game came with a super mutant enemy called the Covfefe .

END_OF_DOCUMENT_TOKEN_TO_BE_REPLACED 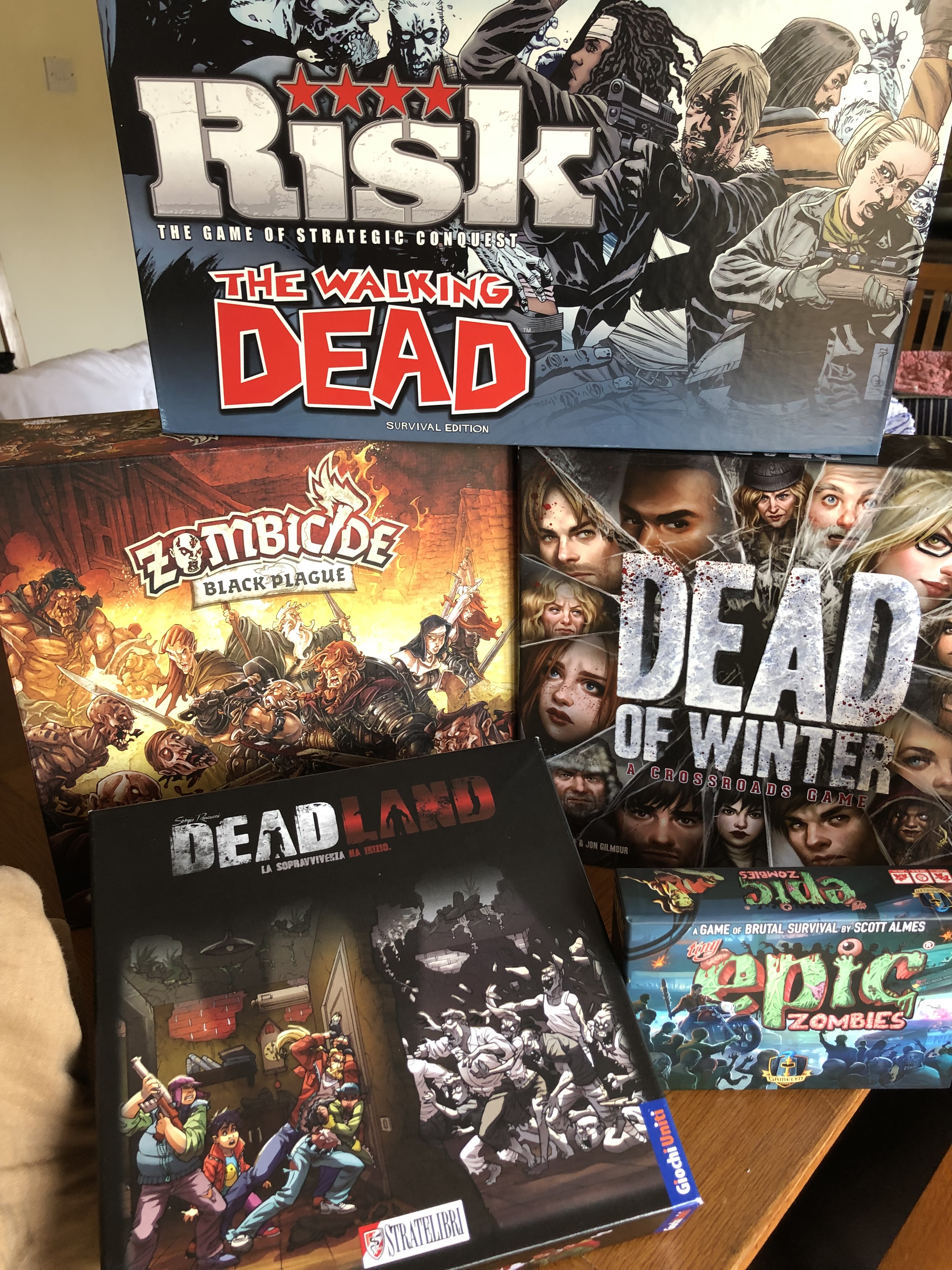 Link to Part One.

To go back to Risk Walking Dead, it’s your classic game of Risk, which is a venerable title designed by Albert Lamorisse and Michael Levin simulating global warfare since 1959 in which you are building and deploying armies and attempting to take possession of enough countries for your faction to ‘win’ through a series of contested dice rolls. Risk Walking Dead features a smaller ‘world’ map depicting the South Eastern United States where the graphic novels were set. The factions are not countries, but Rick’s Group, the Greene Family, The Governor, and the Prisoners, which tells you it was published comparatively early in the Walking Dead universe’s evolution (the game also features art inspired by the original comic book rather than the TV iteration, which is a plus). The twist comes with the optional (and preferable) ‘survival mode’ where the zombie faction are controlled by the game, and their goals are simply to move to where humans are massed in sufficient numbers to make it worth their while. The fun part is that no matter what faction you play, if your people die in combat with zombies, they become zombies themselves. The zombies don’t worry too much about the cost of building their army, they just get more numerous the more destruction humans wreak. This forces limited co-operation between the factions, or at least enough trickery to ensure your people survive and the zombies don’t overrun the map. It’s actually a very apt application of the core themes of The Walking Dead to an existing game system, which shows it can be done.

END_OF_DOCUMENT_TOKEN_TO_BE_REPLACED

In 1978, while you were playing Monopoly (or weren’t born yet, I guess), SPI (Simulations Publications Inc.) released a board game tied in to the release of George Romero’s Dawn of the Dead designed by John H. Butterfield. It could be played as a team or solitaire, with players controlling Peter, Stephen, Roger, and Fran as they dashed around inside the zombie-infested mall trying first to lock the entrances then clear out the remaining zombies. Or you could be the zombies, an undifferentiated horde with a considerably larger team to control (well, slowly nudge around). The human characters had varying skills based on their capacity to move, shoot, and keep calm. They had to make a panic check (roll a dice) after each shot fired, and if they failed, they would be more vulnerable to nearby zombies. The human goal was to move and shoot and try to work around the slow moving zombies and be prepared for sudden ambushes from unseen ones. The zombie goal is not difficult to guess. Think you have it? Good.